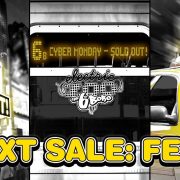 All tiers of Early Bird tickets have sold out, General On-Sale to begin February 1st

New York, January 27, 2017 – MADE EVENT, the premier New York-based producer of electronic music events, the creator of the Electric Zoo Festival and a LiveStyle, Inc. company, today announced that its Early Bird Pre-Sale for the flagship New York edition has sold out. The Electric Zoo Festival returns to Randall’s Island on Labor Day Weekend 2017. This marks the third sold-out ticket sale for the 2017 New York festival. Each tier of tickets released so far—Loyalty Sale, Cyber Monday, and Early Bird Pre-Sale—has sold out faster than any Electric Zoo ever before. The announcement follows the recent success of ELECTRIC ZOO: WILD ISLAND, followed by the sold-out ELECTRIC ZOO: COUNTDOWN SHANGHAI and the upcoming expansion to South America with ELECTRIC ZOO: SÃO PAULO, set to take place on April 21, 2017.

This year’s New York edition, named ELECTRIC ZOO: THE 6TH BORO, will take place on September 1st through 3rd, 2017, the theme being an homage to the festival’s hometown that will sparkle with the surreal, dazzle with imagination, and envision New York City in a way never thought possible. Festival-goers can expect an even bigger star-studded lineup, all-new stage designs, interactive performers, unique installations, and more! Tickets will become available to the general public on February 1, 2017.

“Based on the success of Electric Zoo 2016 and the 2017 pre-sale, we are giving fair warning to all our festival friends to not wait long to buy their tickets as we fully expect this event to sell-out,” said Michael Julian, Marketing Chief of MADE EVENT. “We are working to deliver an experience that cannot be replicated anywhere else. Electric Zoo: The 6th Boro will be the most epic EZoo of all time with a star-studded line-up, all-new stage designs, legendary curators and unforgettable production.”

Electric Zoo recently completed its 8th annual festival in New York City and is bigger and stronger than it has ever been. The three-day music festival, which took place at Randall’s Island Park in New York City, was led by a unique “Wild Island” theme and included over a hundred of the world’s biggest artists on multiple stages. “Wild Island” featured headline performances from Tiesto, Hardwell, current #1 Billboard artists The Chainsmokers, Bassnectar, Porter Robinson and Steve Aoki. The weekend also served as the stateside debut of legendary party experience brands ANTS and Elrow, along with an electric main stage lineup.

The three-day event marked the highest overall attendance since 2013 with over 83,000 attendees. Photos of the event can be found online at www.electriczoofestival.com, on Instragram at www.instagram.com/electriczoony and on Twitter at www.twitter.com/ElectricZooNY.

Additional information regarding Electric Zoo: The 6th Boro can be found online at electriczoofestival.com.

About Electric Zoo
Established in 2009 by Made Event, the internationally renowned Electric Zoo Festival is one of New York City’s largest music festivals and features the top names in electronic music, bringing a wide variety of acts from around the world and across the spectrum of electronic music’s various sub-genres. International editions of Electric Zoo have taken place in Mexico City, Tokyo and Shanghai, with further expansion underway. This year’s 9th annual New York edition will take place on September 1-3 at Randall’s Island Park.

About Made Event
Made Event, a LiveStyle, Inc. company, is a premier producer of electronic music events and the creator of the Electric Zoo Festival. Having produced hundreds of memorable events in New York City, Miami and elsewhere around the globe, Made Event continues to set the bar for quality electronic music events. For more info, please go to www.MadeEvent.com.