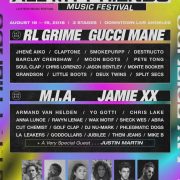 Originally published in Billboard on May 22, 2018

“In Gary Richards We Trust.” That’s what the kids who loved his work at HARD and Holy Ship! were always saying. It was their rallying cry, and when Richards, aka Destructo, announced he was standing down from the company he founded, they were shocked. He joined the team at LiveStyle, and he’s already announced two new festivals in the style fans have come to know and love. There’s the new seabound festival Friendship, and his new downtown Los Angeles summer fest All My Friends.

Headliners for All My Friends were announced in April, including RL Grime, Gucci Mane, Jhene Aiko, M.I.A., Jamie xx, and Armand Van Helden. Today, the full lineup is announced, with dance and hip-hop performances from Anna Lunoe, Yo Gotti, Justin Martin, Barclay Crenshaw, Chris Lake, Moon Boots and many more.

All My Friends comes to ROW in downtown LA Saturday and Sunday, Aug. 18 and 19; performers will be spread across three stages. Tickets are on sale now and everyone 18 and older is welcome to the party.

Check the full lineup and an announcement teaser video below, plus a Spotify playlist of the artists on the lineup. 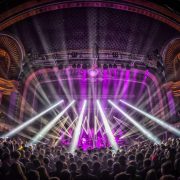 Originally Published in Pollstar on May 3, 2018

React Presents, a company of  LiveStyle, is partnering with independent promoter Jam Productions of Chicago to bring events and electronic, hip hop and R&B artists into venues booked by Jam including the Riviera Theatre, The Vic, and Park West.

Jam Productions, headed up by longtime promoters Jerry Mickelson and Arny Granat, has been a force in the Midwest for more than 40 years, exclusively books the three clubs as well as the Palace Theater in St. Paul, Minn., and the California Mid-State Fair in California.

What the partnership means, according to a source with knowledge of the deal, is that React and Jam will co-promote dance, hip hop and R&B shows in the venues long promoted by Jam, bringing new events into the established venues that are among the premier rooms of their size in the region. Jam will continue to promote the shows it always has.

The clubs are an integral part of Jam’s portfolio and Chicago’s live music scene. The Vic, with a 1,300 capacity, averages 1,271 tickets per event and $34,936 gross sales. Recent shows have included They Might Be Giants, OMD, and “Celebrating David Bowie.” Its upcoming calendar includes Breeders, Flatbush Zombies, Andrew W.K., and Broken Social Scene.

The jewel in the crown is The Rivera, which holds more than 2,500, averages 2,431 tickets per show and a gross of $72,284. Its calendar includes upcoming concerts with Jimmy Eat World, Alice In Chains and My Bloody Valentine, and recently dates include with Glen Hansard, Miguel and Robert Plant & The Sensational Shapeshifters.

React was founded in 2008, and grew to become one of the largest promoters in the Midwest, particularly in the festival space with events including Spring Awakening and Mamby On The Beach, among others. All told, React promotes about 600 concerts annually in the Chicago, Milwaukee and Detroit markets.

After LiveStyle CEO Randy Phillips brought in Hard Events founder Gary Richards as president of the company, the company elevated React Presents’ talent buyer Matt Rucins and marketing director Patrick Grumley as co-managers of React. They, in turn, work with React operations director Amy Butterer and LiveStyle venue operations director Ned Collett to “prepare the company for creative and strategic growth in the years ahead,” according to a statement.