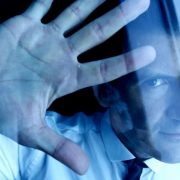 For Gary Richards, the former mastermind of the decade-old Hard Summer music festival, his All My Friends concert is a bit of a homecoming.

“I always wanted to be back in downtown,” he said, of the new event slated to take place in the late summer in the booming Arts District. Compared to past Hard Summer fests, which once parked itself at Los Angeles State Historic Park near Chinatown and has more recently been in Pomona and Fontana, All My Friends is pretty much right back where he started.

“This is a city festival, it feels urban. It’s set up for three stages so when you look at all the buildings, it makes for a cool cityscape feel,” he said.

It’s a chance to start anew after building one of the most formidable and pacesetting brands in electronic music, only to see it thrust into controversy in its later years.

All My Friends will debut at the Row, the leafy and upscale mixed-use office and entertainment complex on the southern end of the Arts District, on Aug. 18-19. It’s a much more modest venture than what Hard Summer had turned into by the end of its run: 15,000 to 20,000 people are expected over the weekend, compared with the 150,000 Hard Summer reached at its peak.

“There’s a lot less pressure and I can be more creative,” he said. “I went to Coachella last weekend and it’s insane how many people there are now. I didn’t want to make this too big and just be a sea of people.”

The lineup is also notably more sophisticated than Richards’ EDM-heavy incarnations before. He’s always had eclectic taste and the generational loyalty of his fans, along with an especially prescient ear for how hip-hop intersects with dance music.

But with a bill led by R&B singer Jhené Aiko, rapper Gucci Mane, club-music royalty Jamie XX and a return visit from electro-rap provocateur M.I.A. (an early Hard Summer performer), All My Friends is aimed less as a teenage rite of raver passage than the next step in Hard Summer fans’ tastes.

“I had to try to figure out a new formula for the music. We’ve rinsed out a lot of the EDM and made it more into live music — 27-35, that’s our audience,” Richards said. “We want to skew to more mature tastes, people who have graduated from David Guetta.”

Starting anew did “feel like stepping into the unknown,” Richards said, but it’s also possibly a relief. Hard Summer, which is still a Live Nation property and will return to the Glen Helen Amphitheater in August, wrapped up largely without incident last year. But prior years had attracted intense scrutiny from public officials, after several young fans who attended the festival died from drug-related causes.

Richards’ departure from Live Nation came as he took a position as president of LiveStyle North America, a new firm founded in the ashes of former rave-promotion behemoth SFX, which declared bankruptcy in 2016 after a string of misfires in the dance-festival circuit.

Richards was able to hire his own new team and reimagine his marquee summer event outside the expectations of Live Nation (and competition from his old L.A. rave rival, Insomniac’s Pasquale Rotella, also under Live Nation). “I’m the president of the company, not just the head of a division,” Richards said. “There’s more people on the same mission.”

For now, he has no goals of scaling up to Hard Summer heights, though he admits to a little bit of melancholy at seeing it go on without him. “It is what it is. I’ve always been able to adapt and create something new,” he said. And after many years of roving, he believes he’s found a flexible long-term site in the Row.

“It feels amazing, thank God I’ve still got these fans,” he said. “I want to over-deliver for them, but also stretch them a bit with the music. It’s definitely time for a change.” 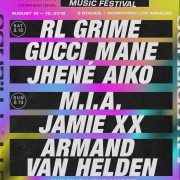 ALL MY FRIENDS MUSIC FESTIVAL

TICKETS ON SALE NOW AT 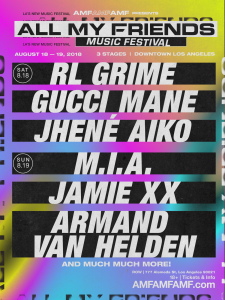 Presented by AMFAMFAMF, major music event producer LiveStyle’s new entertainment brand, ALL MY FRIENDS is an all-star music extravaganza of what is cool and current in hip-hop, R&B and dance music. right now.   The headliners each have a stake in their respective genres, from grime and trap master RL GRIME, iconic southern rapper GUCCI MANE and future R&B queen JHENE AIKO (who’ll perform selections from her 2017 album Trip), to rapper and political agitator M.I.A. who makes her L.A. festival play in support of her recent album AIM, JAMIE XX (The XX’s DJ who enchants on the decks in his own right) and legendary house music producer ARMAND VAN HELDEN for a rare west coast appearance.

ALL MY FRIEND’s inaugural festival will be situated in the heart of downtown Los Angeles at ROW DTLA, a creative space and shopping district.  Its industrial backdrop of Los Angeles’ former major produce market updated with gardens, shade trees and plazas makes a unique location for the festival. Outside festival grounds, fans can take in shopping, restaurants and 30,000 square feet of incredible murals painted by local artists throughout the facility.  More information can be found at https://rowdtla.com/

Tickets for ALL MY FRIENDS Music Festival are on-sale now at www.amfamfamf.com. 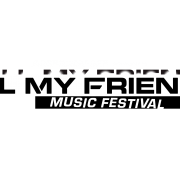 EARLY-BIRD TICKETS ON SALE THURSDAY, APRIL 12 AT 9 AM PT
WWW.AMFAMFAMF.COM

A new major music festival is coming to downtown Los Angeles this summer. ALL MY FRIENDS is a two-day music festival at ROW DTLA happening Saturday, August 18 and Sunday, August 19. Early-bird tickets go on sale this Thursday, April 12 at 9:00 am PT at www.amfamfamf.com.

Presented by AMFAMFAMF, major music event producer LiveStyle’s new entertainment brand, ALL MY FRIENDS will be an all-star music extravaganza of what is cool and current in hip-hop, R&B and dance music right now. Look for the line-up to be announced in the coming weeks.

ALL MY FRIEND’s inaugural festival will be situated in the heart of downtown Los Angeles at the ROW DTLA creative space and shopping district. Its industrial backdrop of Los Angeles’ former major produce market updated with gardens, shade trees and plazas makes a unique location for the festival. Outside festival grounds, fans can take in shopping, restaurants and 30,000 square feet of incredible murals painted by local artists throughout the facility. More information can be found at https://rowdtla.com/

About LiveStyle, Inc.
Positioned to be one of the world’s largest music event producers, LiveStyle with corporate headquarters based in Los Angeles, California boasts a wide variety of leading live music properties. LiveStyle produces and promotes single and multiday music festivals across North America, Europe, South America, Australia and Asia.

Originally published in Billboard on April 4, 2018

The purchase is focused on patented “locker” technology that allows DJs to access an integrated cache of music from the cloud without an internet connection.

Beatport has acquired Pulselocker, Inc. in a strategic deal that taps into the DJ streaming and subscription service’s patented technology for use in its own streaming service later this year, Billboard has learned.

Pulselocker software allows DJs to access an integrated “locker” of music via a number of different performance software applications, including Pioneer DJ’s Rekordbox, Serato, Virtual DJ and more. The purchase will allow Beatport to create an advanced DJ experience for its customers and expand the company’s product offering beyond digital downloads.

hough downloads on iTunes are plummeting, with digital song sales in the U.S. falling 23 percent last year, according to Nielsen Music, Beatport has seen downloads increase in recent years CEO Robb McDaniels tells Billboard. That’s because its professional DJ users want higher-quality sound than most streaming services deliver and they can’t risk an internet outage on the job. McDaniels adds it will take six to nine months to integrate PulseLocker into its platform.

“Pulselocker spent years developing an innovative solution that provides DJs with the flexibility to access the content they want when they want it — all through the DJ software they want to use — while providing copyright holders with the security and tracking mechanisms to calculate royalty payments,” said McDaniels in a statement. “Beatport is committed to delivering the best tools to create a more seamless and interoperable user experience for our massive ecosystem of DJs, and Pulselocker accelerates our timeline to deliver just that type of product.”

LiveStyle president and CEO Randy Phillips added, “Within six months of taking the helm at Beatport, Robb and his gifted leadership team have consistently validated LiveStyle’s vision of supporting innovative strategies and fiscal responsibility by taking Beatport to the next level.”

Pulselocker launched in 2012 as a subscription service that provided DJs with the ability to stream music from the cloud using the company’s locker technology without an internet connection. Pulselocker then tracks the number of plays, along with specific user information about cue points and loops, and delivers copyright holders a pro rata share of the subscription revenue.

But the process of integrating with the large DJ software and hardware manufacturers took years to establish and the company ceased operations in late 2017, leaving customers unable to access content since. By way of Beatport’s user base, when Beatport launches its new subscription service later this year with the Pulselocker technology the company expects further adoption of the system.

“They were so far ahead of their time” that they had trouble getting everyone in the supply chain on board, McDaniels says of Pulselocker.

Pulselocker customers will be able to sign up for Beatport’s new integrated subscription and locker later this year and Beatport has set up a dedicated customer service information page at www.beatport.com/pulselocker for further information.